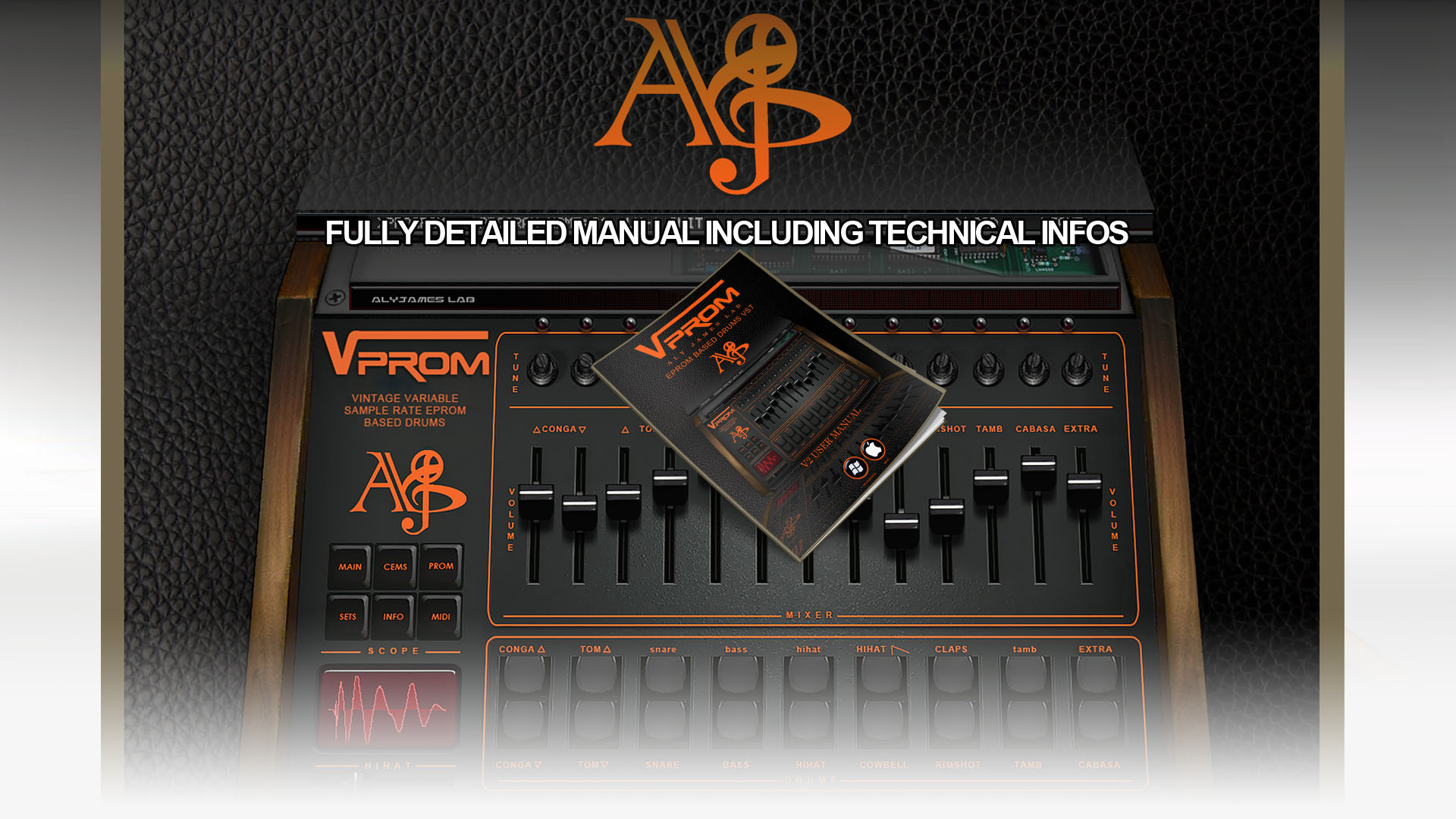 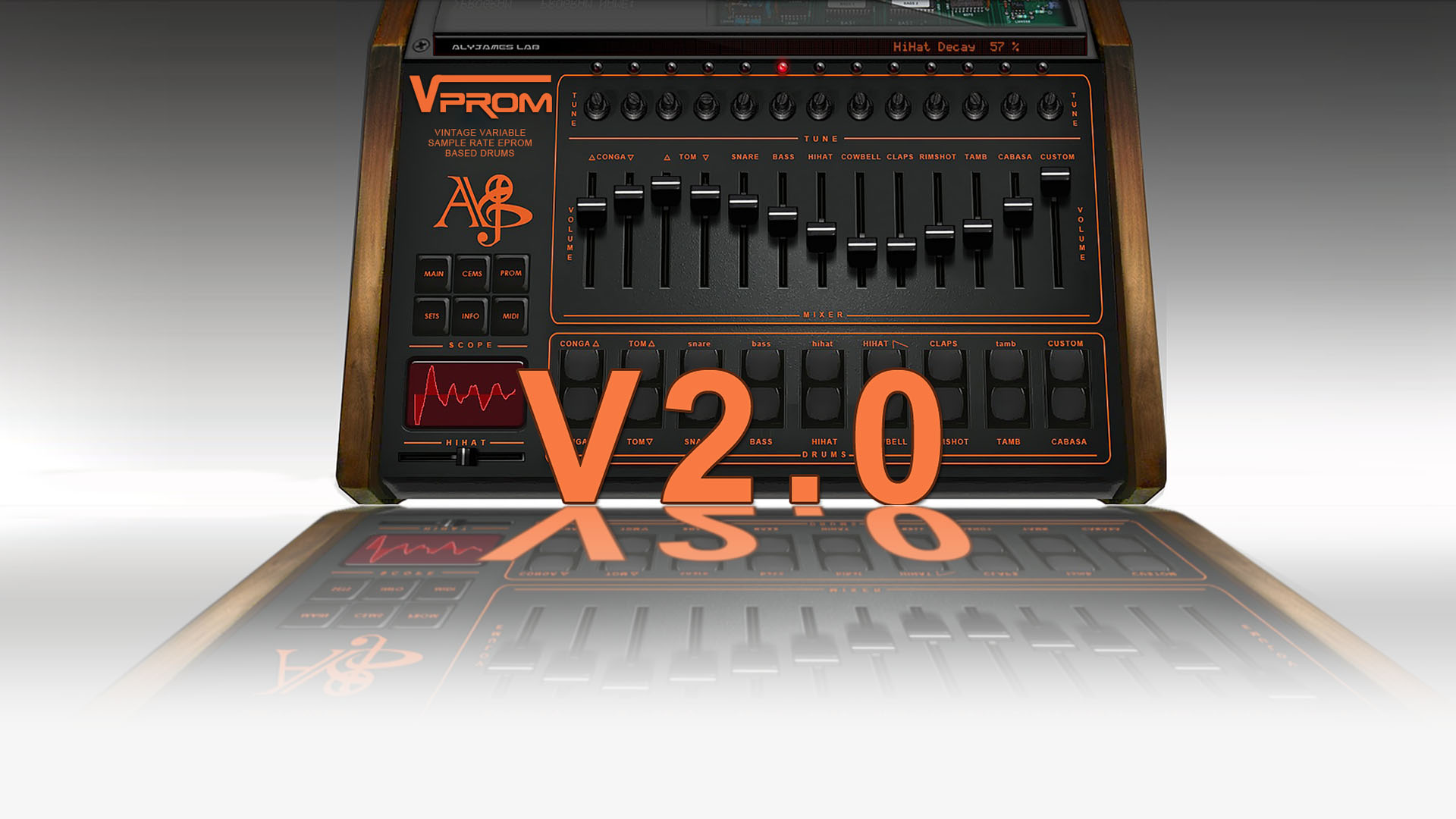 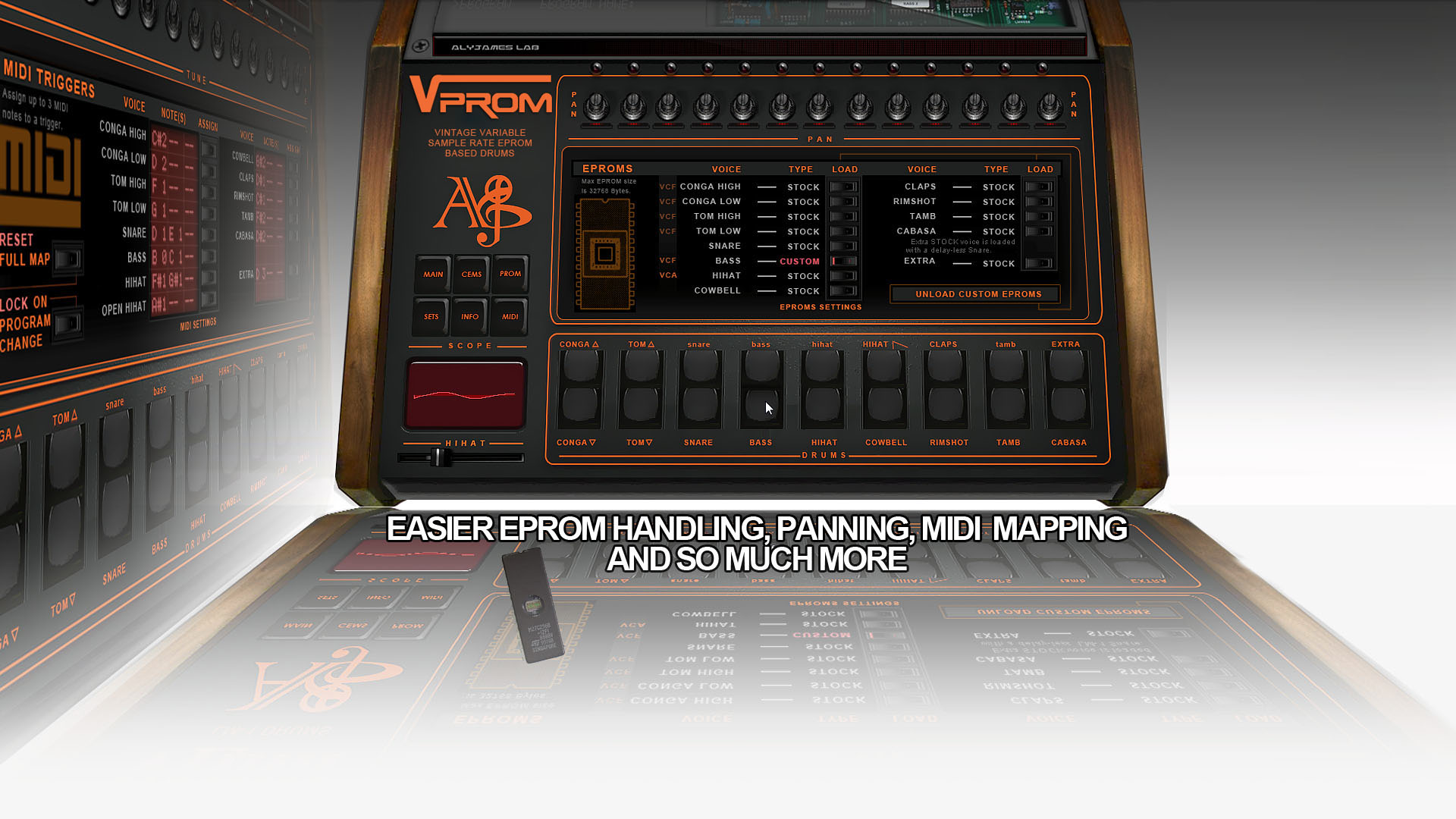 This updade page is only for registered VProm version 2.0.x owners

If you do not own a VProm version 2.0 license use the general VProm 2.0 page 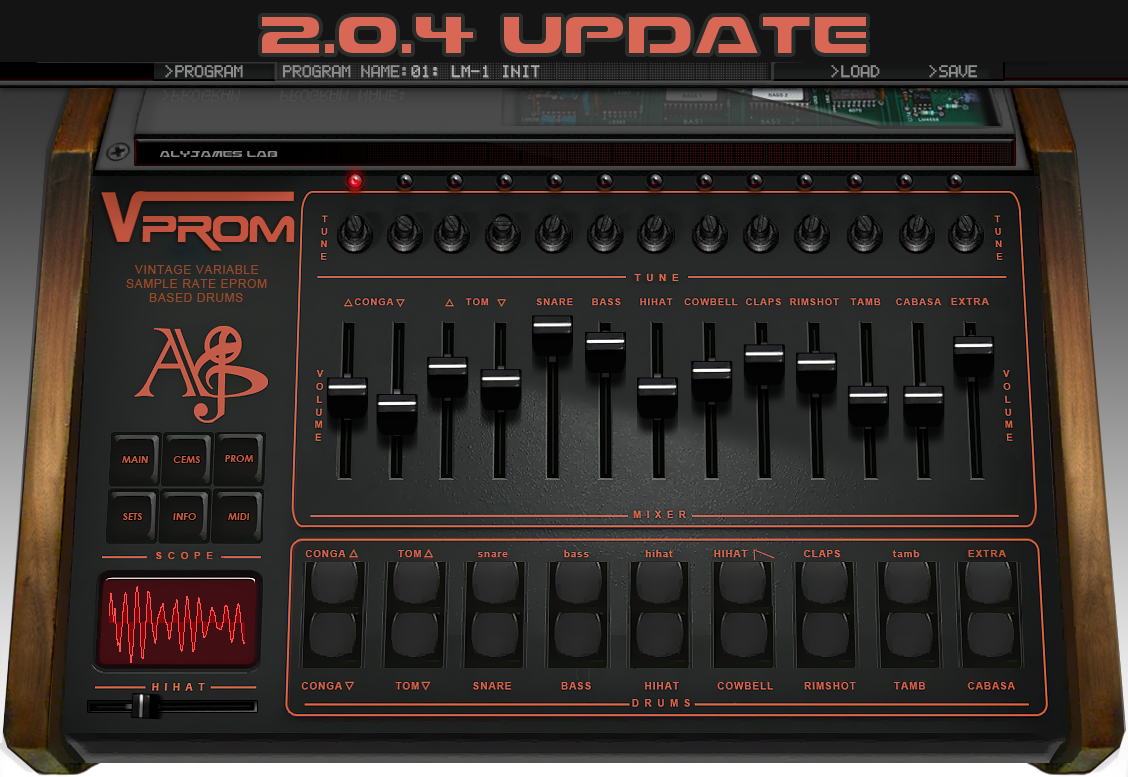 
I decided to request a small support for the 2.0.4 update which will be the first and last paid update for VProm before v3.0.
While new things are on the R&D stage, previous works give me a chance to have time to work on these new creations and I am now throwing piracy into the equation.
I have used low pricing policy from early on and while I am grateful for your support I also like to think that you are grateful for the low entry price vs quality.


When I started AJLAB I believed that using low pricing will defeat the need of piracy, so I never invested in ads, adverts, influencers etc keeping my expenses low, doing all the work alone so I could keep it affordable.. guess what? I was wrong.
VProm 2.0.4 update is availalble for a small support fee starting at 5 Euros, those who can afford to support more than the minimum are very welcome to do so.
While I clearly said this is a one time request some might think it will be common practice...
It is not, it is really a one time request, future minor version updates of VProm, VSDSX etc will stay free, I am considering raising the entry price in the near future so I will never request for support again.


if you feel bad about what I am asking, fine, drop me an Email and you will get the update for free, I am not blocking anyone to get updates and fixes and I already love you as a customer! still a small help is appreciated.


Thanks for your support!


New features in 2.0.4 are detailed below,
one of them should have been implemented years ago but wasn't efficient enough at that time. When you try to emulate past technology like variable sample rate, one thing might be overlooked: there was no additional digital conversion stage after the analog ouput compared to a modern digital workstation processing a plugin at a certain sampling rate.


Any resampling artifact that might happen in high frequency spectrum (example a tambourine) will mess up the frequency content when the playing sample rate/tuning is not a perfect multiple of the soundcard actual sample rate.
That crunchy sound we all like when something is played at a low sample rate is often mislabelled as aliasing...to simplify let's say there are good and bad aliasing, the good one keeps original frequency content while it adds harmonics perfectly related, the bad one will add unrelated harmonics that might or might not be desirable. On this original hardware, the bad aliasing wasn't there...Now in version 2.0.4 you have option to run a x16 oversampling processing to get rid of any artifacts on TAMB, CAB, HIHAT and EXTRA voices, it works at any sample rate.
A voice that is high frequency heavy will alias badly at 44.1K sample rate and even at 96K, it will color the sound in a way the original hardware didn't, some might like it, some don't, hence the optional switch.
Once engaged the TAMB, HIHAT, CAB and EXTRA EPROMs are oversampled 16 times to get rid of most of the aliasing produced by high frequency harmonics reflection and will sound perfectly at any tune, keeping the harmonic relationship intact.
Precisely it will oversample by x16 at 44.1 and 48K sample rate and by x8 above, you will have something like 768K internal processing if running at 96K, though it is kept very light on CPU!
I would advice to use either TAMB, CAB, HIHAT or EXTRA PROM slots to load any high freq heavy custom EPROMS, they will sound better oversampled at least if you want no nasty coloration, just test on the tambourine and you will hear it.

this is just one of the new features you will see bellow, I hope you enjoy making funky grooves with VPROM as much as I do! 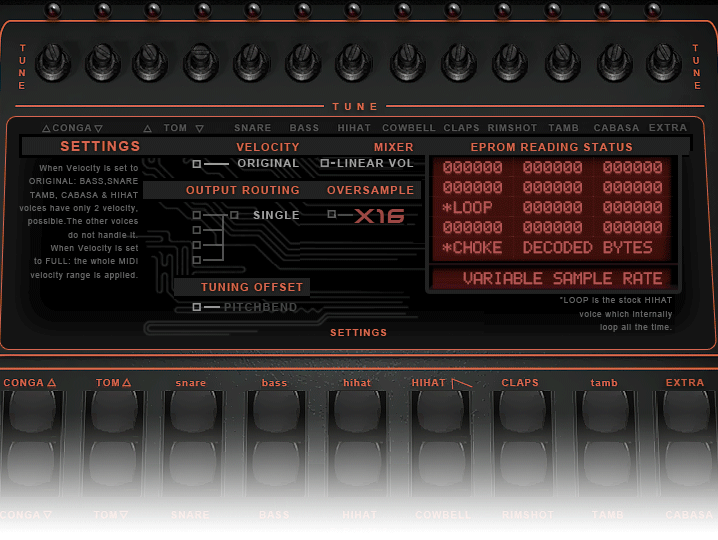 New feature to change the mixer volume slider's response between Linear (original VST behavior) or Log Tappers (closer to hardware). Some people might have better habits with audio tapers so now you have the choice, keep in mind that default presets have been made using linear mode. The difference is Similar to this: linear will have finer detail over a small Db range of full volume, while Log can be easier for overall balance

Hihat curve, timing and range updated, closer to hardware Some more advanced tests on hardware have been done to tailor the hihat VCA, timing and curve is now more accurate (new curve in RED) 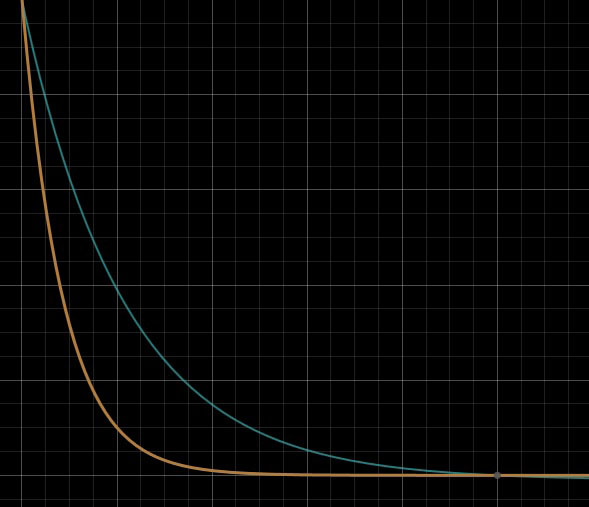 New feature to instantly stop the playing of the Extra voice, useful for choking cymbals.. This is working only with the EXTRA voice and the CHOKE event trigger is permanently fixed to note C4, when the note is triggered it will stop the EPROM playing immediately and will be held in CHOKE until the EPROM is played again normally, the CHOKE is reflected on the EPROM playing status. You cannot assign note C4 anymore to custom MIDI mapping as it is reserved for CHOKE, if you still do, VPROM will warn you anyway :)

Voice names are now kept marked on top of the GUI panel when not in Mixer view: useful so you can actually use the tuning easily from every panel without using the tooltip naming of the tune knobs

Version 2.0.4 is likely to be a stable update for a while so you won't be trapped in a paid upgrades forever circle. But now I also need to face piracy and will rely a lot on the user base...

The full cross-platform VProm version 2 is now available for 45 Euros, still cheap IMO for what you get: D

As you probably know Aly James Lab is only me and porting my existing Windows VSTs to cross platform is taking a long time, especially while I also need to work on new developments in order to keep things interesting for everybody.


You can check your current version inside the INFO panel on the GUI.
Updates for VPROM VST are free for bug fixes and donationware for added features until version 3.0

VProm 2.0.4 comes with both Windows & Mac Installers and Manual

Price to get the VProm 2.0.4 update package starts at 5 Euros

Be sure to use your original Email and Name as registered, if using a different one be sure to write your registered info into the comment box or Email!


Thank you for supporting my work. I will need you big time in order to continue and that is why I am releasing publicly the last VProm VST update 2.0.4 as a paid update starting at 5 Euros, those who can afford to support more are very welcomed.

Once your payment is accepted you will receive an Email with instructions and the VProm software link within 3 days Max.

Be sure to authorize incoming Emails from info@alyjameslab.com and alyjames.info@gmail.com in case they would be blocked by your spam filter.